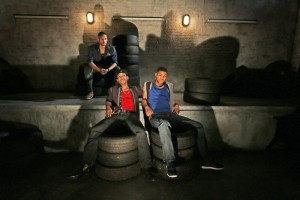 Tarell Alvin McCraney’s play “The Brothers Size” was written back in 2007 when McCraney was in his third year as a student at Yale School of Drama.  Though it was written nearly 10 years ago, it reverberates with that knell that resonates deep in the heart like the lowest thrumming notes of a pipe organ.  So many overtones to that note and so deep it is almost below the human capacity to hear.  But it is felt.

Combining Yoruba mythology for whom his characters named with an all too familiar urban tale, we have two sets of brothers.  Ogun (Brandon Carter) is the eldest brother Size who’s always felt the weight of providing for and protecting his family.  Their mother died when both boys were so very young and Oshoosi (Shamsuddin Abdul-Haid) ever since that time has always found himself on the wrong side of most situations.  When the action of the play begins, Oshoosi has just completed serving time in prison and it’s made him bone-deep exhausted and as enervated as it’s possible for a human to be.  Set in bayou country, it’s easy to image humidity so deep you can swim in it and Oshoosi feels every molecule of its weight.  Ogun does his best, but motivating Oshoosi is like herding cats.  Oshoosi’s not lazy, but his nightmares have him running full out in a way Ogun has yet to fully fathom.

Oshoosi’s other brother is one of circumstance, his buddy Elegba (Clinton Lowe) with whom he bonded in prison.  There’s a thrumming current between them and it’s only later that we see the web that Elegba has woven.  Elegba’s sinuous machinations and smooth ways of influencing Oshoosi could be based in his own psyche or possibly his knowledge of what motivates his young friend, the dreamer.  Elegba was Oshoosi’s “brother in need” during his time in prison when Oshoosi missed Ogun like an amputee misses a limb.  Until the end of the play, however, it’s not clear fully what that means.  Elegba has a level of influence parallel to Ogun’s but very different in affect.

Oshoosi’s special talent is seeing and believing the best in everyone, yet this is what leads him down the primrose path time and time again.  When Ogun makes the penultimate sacrifice for Oshoosi, there’s no doubt of this brother’s love.  The question is always what will we give so others may live.

Be sure to visit the Context Room, a very new feature of Luna Stage productions.  There, you’ll see historical context, how Christopher and Justin Swader’s spare and clever set and Daisy Long’s brilliant lighting design set the various scenes.  Isaac Mandel’s sound designs give greater depth to piece and Joya Powell’s choreography gives us a sense of the dance of everyone’s life – as we work with our partners to create what’s real for us.  Deborah Caney’s costumes were perfection, though throughout the evening, the hooded sleeveless sweatshirt Oshoosi wears kept bringing to mind Trayvon Martin, though that tragedy was five years in the future from when this play was written.

“The Brothers Size”, part two of McCraney’s trilogy The Brother/Sister plays,  only runs through March 6, 2016.  If you want to give someone an amazing experience, get your tickets now by visiting lunastage.org.