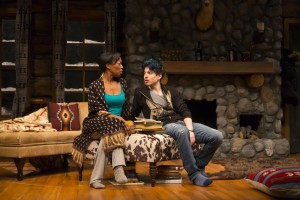 Laura Eason’s “Sex with Strangers”, starring JoAnna Rhinehart as Olivia Lago and Kyle Coffman as Ethan Kane, poses a host of interesting questions from the very first moments.  As the play spins out, some of those questions are answered and some are left pendant and consequently the play itself and the effects of it’s thought-bombs will stay with you long after you’ve emerged from the darkness of the theater.

You may not know Eason’s name, but if you’re a fan of “House of Cards” then you already know her work.  She writes complex characters and the ideas ping off one another like the dice in your childhood Pop-o-Matic.  The ideas and their offspring come back again and again as the characters spar, coalesce, change and do all of the things that molecules and electrons do.  Olivia and Ethan initially throw off electrons like there’s going to be an explosion, and when it happens it’s a 180 from GRRRR to O-O-O-OOOOOHHH.

Olivia is at her favorite writer’s retreat, literally far away from “it all”.  She’s a Chicago resident who uses this remote cabin, where there’s wireless but no television or cable, to collect her thoughts.  She’s putting finishing touches on her sophomore novel, though her first effort was nearly two decades previous.  While many loved her novel, it didn’t achieve the numbers she or her publisher had projected.  She withdrew and it’s taken *this long* for her to work through her demons that prevented her completing her second work until now.  In like the big wind from Winnetka sweeps 20-something social media phenom Ethan Kane, whose nom de plume “Ethan Strange” and his blogging about his cocksmanship has made him the darling of the male hipsters and gamers.  His nihilistic pursuit of women to conquer provides grist for the mill and has made him a wealthy man.  Yet this pursuit leaves him empty and he’s searched out (stalked?) someone who’s become his favorite author hoping some of her genius will ignite the “real” book he knows he has within.  When angst-ridden immovable object meets hither-to irresistible force, seismic shifts occur on fault lines that neither knew existed.

Jason Simms’ sets and Michael McDonald’s costumes are well complemented by Scott Killian’s sound and Christopher J. Bailey’s lights.  Eason’s characters shine through Rhinehart and Coffman and while “Ethan Kane” sounds like an alter ego of some kind, his quirky spikey energy is an excellent contrast for “Olivia Lago”, whom some might interpret as “peaceful lake”.  Consider, however, that still waters run deep and lakes have their own secrets as well.

Social media, print versus “soft” or electronic copies of books, cacophonies of reminder and notifications and what does it mean to reveal too much or too little of yourself in a world with a 15-second news cycle?  These and other questions will surely spring to mind and you owe it to yourself to experience “Sex with Strangers” now.

Share this show with someone you love to talk to – you’ll have plenty to say! The run of the show ends March 27, so hurry and visit GeorgeStreetPlayhouse.org today for best seating!