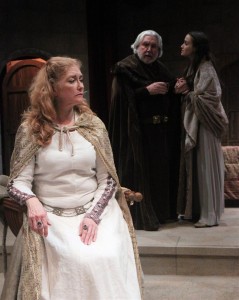 King Henry II (Kevern Cameron) is in a pickle.  It’s Christmastime in 1183 and France and England as we know them today do not officially exist.  England controls much of what is now France, in the immediate wake of the Norman Conquest, while Henry rules in Brittany, Normandy, and the land his current wife Eleanor (Maria Brodeur) brought with her, the province of Aquitaine.  When they first met, she was married to Louis VII, the French King and son of her guardian Louis VI.  At the time we meet them in James Goldman’s classic, “The Lion in Winter,” now being given in New Jersey by the Chatham Community Players, he’s about 50 and she’s 61–both advanced in age and wiles and moving their children and ward around like pawns in a game of Christmas chess.
Alais (Adriana Spizuoco) is Eleanor’s ward and has become Henry’s mistress during the time that Henry has had Eleanor imprisoned so that she wouldn’t, quite literally, meddle in his affairs.  Alais is conflicted–Eleanor has treated her as a daughter, yet she feels she loves Henry in a way that Eleanor has never done.  However, youth has a hard time remembering that elders were once young and equally hot-blooded, as we discover when Eleanor and Henry remind us of their meeting.
Their sons who survived infancy number four … Henry, the presumptive heir, has died in battle.  This leaves the Henry’s kingdom up for grabs since primogeniture, inheritance by the eldest, has not yet come into fashion.  Richard (Dominick J. Denucci) is Eleanor’s favorite.  He took control of his own army at 16 and now, at 26, he feels he’s the son who should inherit.  Next eldest, and heir of his parents’ wiles, is Geoffrey (Scott Tyler), who ultimately becomes Duke of Brittany, but vies strongly with his brothers to become King, and is a great friend and ally of Alais’s brother Philip (Shane Long), King of France.  Finally is John (Matt Coakley), the youngest brother, who is Henry’s favorite.  He’s only a teen, whose puny body is no match for his great will and even larger temper.  These three brothers are classic in the petulance and pique, as they spar with one another and their parents for supremacy but, as always, we find that age and experience trump youth and enthusiasm.  Henry and Eleanor play their progeny like the virtuosi they are and it’s refreshing to know that my family and yours are not the inventors of Christmas family dysfunction.
This ensemble, headed by Brodeur and Cameron, chews the scenery to sawdust in as intense a version of this play as I’ve ever seen.  Henry roars while Eleanor weaves her web and Richard, Geoffrey and John have no idea of the complicated dance that’s choreographed for them.  Alais is twisted, like a floating needle between two magnets, in her freshness and nuance of her romantic love for Henry and familial love for Eleanor, while Philip is motivated by a different love of his own, as becomes apparent in a Marx Brothers-worthy bedroom scene.  Jim Peskin’s expert direction orchestrates the characters like the parts of a symphony, while Roy Pancirov and Bob Lukasik have created a versatile set design that is as evocative as it is flexible.  Sound by Joe DeVico further adds to the drama and if you fancy the stained glass windows on the set, those are available to grace your home after their work at Henry’s castle in Chinon.
Want to warm up YOUR winter?  This show is more exciting than MMA and more memorable than a night at the fights.  Visit Chatham Community Players’ website at www.ChathamPlayers.org.   Reserve NOW!  “The Lion” sleeps after March 19 so get your choice of tickets NOW!