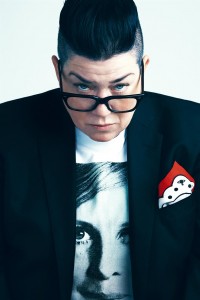 LeaDeLaria has been a cause célèbre since 1993 when she became the first out gay comic to be featured on late night television when she appeared on Arsenio Hall’s show.  Now a nationwide household name, though she’s been a name in many of our households for the past 25 years and more, Lea is enjoying some well-earned and richly deserved renown.  A gifted jazz singer with Broadway chops, DeLaria revolutionized the portrayal of Hildy Esterhazy in the 1998 Broadway revival of “On The Town” that Entertainment Weekly called “showstopping”.  It garnered her a Drama Desk nomination.  She’s also got an impressive discography including the February 2015 release of her latest work, “House of David delaria+bowie=jazz” on the presciently named Ghostlight Records.

UT:  Your role as Carrie “Big Boo” Black in the Netflix series “Orange is the New Black”, for which you’ve won a Screen Actors Guild award, has put you on the map for many who don’t know your career – do you believe that’s because it’s more difficult for women who choose to be comedians or because it’s more difficult for women to be seen as the talents that they are?

LD:  The industry is what it is, I’m not sure how to respond.  I can point to a million people who are out and successful.  Does it take longer for women or lesbians to become famous?  I don’t think that’s true.  Gender or heterosexism doesn’t have anything to do with the length of time it takes to become famous, with one caveat.  Years ago, in the 1980s, it was us radical bitches who had a different agenda.  We were out performing not to become famous, I wanted to change the world.  That’s why those who come out later might be a little suspect.  Were they not doing well before and coming out might help?  It’s hard to say.

UT:  Back when you MC’d Jersey Pride in Asbury Park (back in 1995 or 1996), you gave a concert at the Paramount the Saturday before the Parade and Rally.  You had a three piece combo working with you and you were SWINGING!  Who were your musical influences growing up and when did you first find you had a jones for jazz?

LD:  When I first began singing it was more about having your own sound. My father was my first influence, he was a jazz pianist as many people know. My first experiences were singing with his combo so I was always into jazz sounds.  From my very early days, Ella Fitzgerald, Betty Carter and many others as singers were influences, but maybe even more were instrumentalists like Coltrane and Sonny Rollins.  They probably influenced me more than singers.  But I’ve always been a fan of jazz.

UT:  How soon after the Arsenio Hall gig did you begin acting?

LD:  Less than a year after I appeared on Arsenio, there was a cameo written for me in the lesbian wedding episode of “Friends”.  Same as they did for Candace Gingrich (who played the minister).  I got to not only hit on Phoebe, part of my backstory was that I got her!  Now when I first appeared on “Matlock”, that was different.  A lot of directors were thinking “she’s a stand-up comedian, what does she know about acting”.  I had to prove to them I could act.  And when I did, my role as Detective Pat Jordan led to a return (as Detective Pat Poletti).  Andy Griffith was a friend, and I think of him as a mentor as well. He taught me how to act for a television camera.

UT:  Your latest CD, House of David, was released in 2015.  It’s ironic that the tribute you did while he was living has become a paean now that he’s passed.  Did you hear from David directly regarding your interpretation of his work?

LD: David started following me on Twitter last February (2015) and his office contacted us and got a copy of the CD. We were trying to figure out how to get him into the concert, when he passed.  As I understand it from his people, he enjoyed it and was listening to it, right before he died.

UT:  What’s the question you always wish you would be asked in an interview?

LD:  I gotta say (laughing, low), I’m sorry to be the one to tell you this, but there isn’t one!  I’ve lead a very charmed life.

UT:  In terms of being very outspoken and plain-speaking, what benefits have you seen from being so straightforward, honest and correct?

UT: Did you ever imagine when you were being out and loud and proud that you would ever be where you are today?

LD:  Did I ever think I’d be on One Life to Live for a decade, or get an Obie or be snubbed for a Tony or have an acting career?  When I started out in the 80s no one thought that, because the world was different then.  Did I ever imagine that social media would have everyone from 9 to 90 taking pictures and wanting to talk to me, the moment I walk out of my door?  I’ve been famous for a long time and I’m a little more prepared for this than most people. I haven’t had a day job since 1982. Most of the people who approach to say hello, or get an autograph are very polite.  My fiancée coined the nickname for me “Bull Dyke Santa Claus” because when people just see me, they smile.  But I never imagined this when I began.  All I ever wanted to do was change the world.